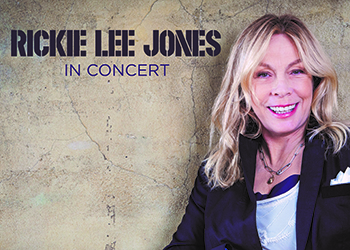 RICKIE LEE JONES has spent a life time dancing with her muse. She is the most iconic American female singer-songwriter of her time, a woman who outlasted all her adversaries--including youth and self-destruction. A seasoned humility brings her performances an authenticity that only long-enduring musicians achieve. Her artistry is brilliantly underlined with her 2019 album KICKS. The album spans two decades (50s-70s) of pop, rock and jazz, presenting her unique and sophisticated interpretations of songs that were pivotal to her musical journey.

By the time she was 19, JONES was living in Los Angeles, waiting tables and occasionally playing music in out of the way coffee houses and bars. All the while, she was developing her unique aesthetic: music that was sometimes spoken, often beautifully sung, and while emotionally accessible, she was writing lyrics as taut and complex as any by the great American poet, Elizabeth Bishop. In JONES’ voice and songs, we saw smoky stocking seams, love being everything but requited. And it was during these years that RICKIE LEE’s song, "Easy Money," caught the attention of one musician and then the music industry. The song was recorded by Lowell George, the founder of the band, Little Feat. He used it on his solo album, Thanks, I’ll Eat It Here. Shortly thereafter, Warner Brothers auditioned JONES and quickly signed her to the label.

Join us Saturday evening with this Grammy-winning singer-songwriter, which will demand you stop and pay attention to favorites and deep cuts that span pop, jazz, standards, and rock.